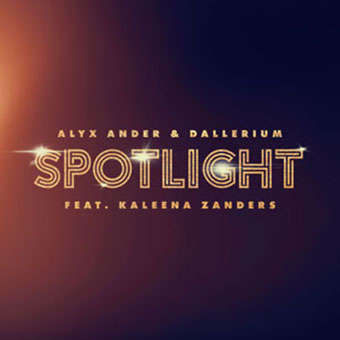 The hugely talented Miami producer AlyxAnder has teamed up with fast-rising Croatian duo Dallerium to produce an unmissable house version of the Jennifer Hudson classic ‘Spotlight’.U.S. vocalist Kaleena Zanders steps up to deliver a stunning vocal on this version due out on Perfect Havoc Records on 21st February. The original track gave Jennifer Hudson her first chart hit around the world and while this updated house version takes the track back to the dance floor, it has all the credentials required to become a hit of its own.

Alyx Ander is a widely recognised talent, with Pete Tong himself premiering his debut track ‘Close Enough’. The producer originally from Queens, New York is a classically trained musician, but as soon as he experienced the likes of Danny Tenaglia, Jonathan Peters and Tiëstoat infamous NYC clubs like Sound Factory and Exit, he knew his future lay in electronic music. Since then he’s released on such labels as Nettwerk, Armada Deep, Spinnin and BigBeat, enjoying support from the likes of Tiesto, SamFeldt, Nicky Romero, Don Diablo, Martin Garrix and many more.

Dino Travaš and Tomislav Zovko a.k.a.Dallerium are up and coming producers from Zagreb in Croatia.Their breakout track ‘Need U’ released on LYD in late 2017has received over 4 million streams to date and laid the foundations fora string of successful releases and remixes on such labels as SonyMusic, Future House Music, Selected, Chill Your Mind and more.The duo’s remix of ‘Swear To God’ by Famba on Sony made such waves that 1001 Tracklists tipped Famba at #4 is its Newcomers Chart culminating  in the remix being played by DJs across the world.

It needs to be a special voice to do justice to a Jennifer Hudson track and Kaleena Zanders does not disappoint. Her powerful, soulful voice has seen her collaborate with such heavyweights as SNBRN, Breathe Carolina, LoudLuxury and more, with support for her tracks coming from Diplo, Benny Benassi, Oliver Heldens and many others. Kalena’s unique artistry has allowed her to take to the stage at Coachella, EDC,CRSSD, LA Pride and more.