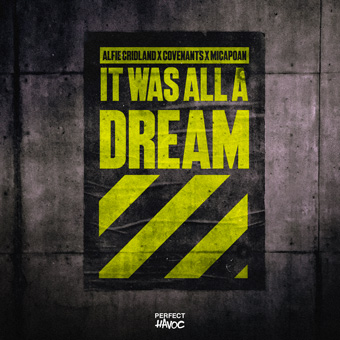 Alfie Cridland, Covenants & Micapoan - It Was All A Dream

‘It Was All A Dream’ is the new single from multi-genre producer, Alfie Cridland and rising UK duo, Covenants, where that infamous Biggie lyric - originally heard on ‘Juicy’ -weaves its way through a driving tech house weapon. Due for official release on 11th February via London’s indie imprint, Perfect Havoc, anyone clubbing over the festive season may have heard it dropped by any number of artists from ACRAZE to Miane (Moon Harbour), and Sam Divine to David Tort.

The hype around this single began early December 2021 when it was originally released as an ‘ID’, gaining tastemaker support from producers and DJs including Fedde Le Grand, Joachim Garraud, Idris Elba, Gorgon City’s Matt "Rack NRuin" Robson-Scott, Lexlay and Patric La Funk. With four spins already on KISS FM from TCTS, there’s no doubt ‘It Was All A Dream’ is going to blow up.