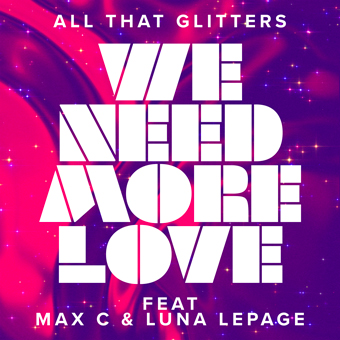 Perfect Havoc present All That Glitters with their new single We Need More Love featuring Max C & Luna LePage. All That Glitters was originally formed in2012 consisting of Mark Alston (Writer/Producer behind PS1) and Peter Mayes(Part of Australian Electronic Group PNAU). An upbeat and fun record between a host of new collaborators, All That Glitters goal was to bring some happiness to the people!

2021sees All That Glitters release their fourth single ‘We Need More Love’ on acclaimed UK label Perfect Havoc (home to Joel Corry and more). “The track started out as a very simple, more underground record with only a little bit of vocal from the amazing Luna LePage,” explains Peter. “Then we asked Max’C to work on the record and he brought us some beautiful melodies and gave the song its message. Next, we asked Luna to do some more parts as it was fast becoming a much more vocal oriented track. This record was made while the world was going through some heavy shit and whilst this lyric works in any era it makes a lot of sense right now. We wanted to bring some happiness to the people, especially now that they are allowed to go dancing again. The title is the message. We Need More Love.

Early in his career Max C became the lead vocalist for the Scandinavian based group3rd Nation, which lead to the smash hit single ‘I Believe’ with Swedish talent Stonebridge. This single landed in the American billboard hot 100 singles chart at #8 and made the top 10 list in many countries around the world and very much announced the arrival of this special talent. Since then, some of his biggest hits have come in cahoots with Swedish DJ Axwell. The first song the pair worked on was the smash hit single ‘I Found U’ which blew up on Radio 1 in the UK and shot up the official UK top10 chart to #6 in 2007. From ‘I Found U”s success, Max C was soon being called the new male voice of house music. He has continued to remain busy the following years releasing tracks such as ‘I Miss You’ featuring Brever & Bakchos, ‘You’re The One’ featuring Phil England ,‘Into The Night’ ft. Carl Kennedy and many more.

Luna, an international singer/songwriter formerly known as Beth Morris, was mostfamously known for her appearance on The BBC One show The Voice in 2016 where she received a four chair turn and a place in The Live Finals. However, shetruly began her journey as an artist after a controversial exit from the show.

Luna has been in artist development for the past 3 years and has used all her bumps in the road to create an authentic and honest grit stained body of work that is sprinkled with dark optimism and undeniable power. She believes that music is away of sharing your utter most truth in order to connect and bring unity to one and all.