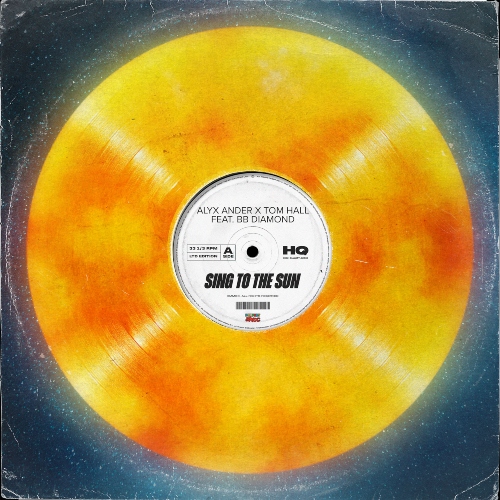 Perfect Havoc are thrilled to have Alyx Ander and Tom Hall team up for their collaborative single ‘Sing To The Sun (feat. BB Diamond)’. The promising duo has delivered a feel good anthem that screams summer ecstasy. Featuring a hooky melody and enticing vocal from the incomparable BB Diamond, ‘Sing To The Sun’ is sure to make you dream away to your summer getaway.

Alyx Ander’s unique brand of dance music has received serious accolades from around the world from the moment he debuted his breakout single in 2015. His first ever release earned an unexpected endorsement from industry icon, Pete Tong, who chose to premiere the song on BBC Radio 1.

Since that initial release, Alyx Ander has racked up millions of streams for his original releases which have been regarded for their originality, level of depth, and dance-floor appeal. DJs like Tiesto, Martin Garrix, Sam Feldt, and many others featured Alyx Ander’s tracks in their syndicated podcasts. Esteemed editorial outlets like Billboard, TIME Magazine, Mixmag, and DJ Mag have highlighted his releases with flattering reviews while numerous songs of his became mainstays on SiriusXM radio’s BPM channel, reaching a national audience across the United States.

Hailing from Queens, New York, from a family comprised of multiple generations of artists and musicians, Alyx was born into a life of music. He began his training early on, leading theatrical productions at Manhattan’s prestigious LaGuardia High School for the Performing Arts, otherwise known as the school that inspired multiple Fame films and television series, and later moving to Florida to attend the University of Miami as a vocal performance major. In 2020, during a time when many artists were experiencing a slow-down, Alyx Ander made a momentous step with the launch of “Day Life”, his own weekly radio show on Sirius XM Chill that shines a spotlight on “living for the day rather than the night.” Combining his artistic project with his role as the Entertainment Director for the 1 Hotels brand, “Day Life” showcases music and entertainers while highlighting topics such as mindfulness and wellness in a unique and playful way.

Coming off a recent collaboration with Grammy winner and two–time Grammy nominee, Mýa, Alyx Ander has a spate or releases forthcoming in2021. Plus, as live events start up again, 1 Hotels will be launching “Day Life” as a live event on their properties. Indeed, lots more are in store for Alyx Ander in the year ahead, and we’re all invited. As he says in every show of “Day Life”, “Welcome friends.”

Tom Hall is a Shropshire based talent showcasing DJ sets across the UK, Europe and beyond.
His most recent singles “Go Down Fighting”, “With You” & “Collide” have received big support from BBC Radio 1 DJ Jordan North, BBC Radio 1 DJ Dev, BBC Radio 1 DJ's Mollie King and Matt Edmundson and also made it into the iTunes Dance chart at No.6 and main chart at No.28. Tom’s previous single 'Casual', released on Hardwell’s Gemstone label continues to grow and has generated over3 million streams globally and has featured as the show opener on the reality TV Show ‘Celebrity’s Go Dating’.

The in-demand artist has offered his remix hand to the likes of Todd Terry, Joel Corry, PS1, Tobtok & more".

BB Diamond first emerged in 2015touring extensively as a backing vocalist for Jess Glynne and Katy B. Shortly after releasing her debut solo single and signing to Turn First (home to Zayn, Rita Ora & Iggy Azalea), she reached BBC Radio 1’s A-list featuring on ShiftK3Y’s track ‘Gone Missing’. She then went on to feature on club banger ‘I Still Remember’ by Robbie G, released on Perfect Havoc.