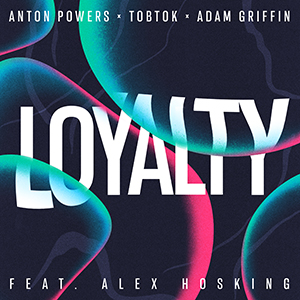 DJ, producer, remixer, radio presenter and A&R, Anton Powers, has been an influential figure in UK dance music for over 20 years. From his home in Liverpool selling vinyl to Carl Cox and Paul Oakenfold to later hosting peak time dance shows on Radio City and now Capital FM, Anton Powers is a globally renowned artist with over 1 million single sales and more than 150 million online streams.

The Silver, Gold and Platinum awarded Powers had big success with ‘Alone No More’, which debuted at Number 1 on both the iTunes and Vodafone Big Top 40 Charts and shot straight to Number 4 in the UK Official Chart. It was followed by more hits - and official remixes for the likes of Kylie and Stefflon Don - notably ‘Baby’ featuring Pixie Lott alongside high profile TV performances on ITV’s The Voice Final and Britain’s Got More Talent Final.

Joining Powers on ‘Loyalty’ is breaking talent, Tobtok aka Tobias Karlsson, one of the most talented artists leading the new wave of Swedish electronic music DJ / producers. He has generated over 450 million streams globally across his original work, remixes and productions for Joel Corry, Robin Schulz and Karen Harding to name few, on such illustrious labels as Ministry of Sound, Kitsuné and of course, his home at Perfect Havoc.

Completing the bill of producers on ‘Loyalty’ is Perfect Havoc co-founder, Adam Griffin. Alongside Robert Davies, Griffin has steered Perfect Havoc into oneof the most in-demand independent labels around. Its rising status is underlined by platinum certified releases, generating over one billion global streams, and breaking the three-time Brit Award-nominated producer, Joel Corry on multiple singles including the Number 1 single with MNEK, ‘Head & Heart’.

From DJing at pivotal London clubs in the 90s such as The Cross and Hanover Grand and holding senior marketing roles at Sony / RCA, to then A&R’ing at Perfect Havoc, Griffin’s first studio outing came in 2019. His contagious house cuts prove this label boss can produce with the very best of them. Debut single ‘The Sting’ alongside Tobtok received key support from Annie Nightingale; ‘The Stand Off’ was a hit with Mistajam and made Future Anthem on BBC Radio 1, while ‘Don’t Over Think It’ -produced with house icon Todd Terry – was again a hit on Radio 1’s dance shows. Over 10 million streams have been generated so far by this versatile label head and he’s only just getting started.

As with all quality Perfect Havoc releases, this latest single is elevated by a standout vocal performance. Featuring Australian singer-songwriter Alex Hosking, she first broke onto the UK scene with ‘Fake Friends’, a collaboration with New York-based DJ/producer, PS1 on Perfect Havoc / Columbia Records. It charted at Number 19 in the UK Official Charts giving Hosking her first Certified Silver release. Again, with PS1, Hosking has been climbing the UK Charts with their 2021 release ‘Life Goes On’, thanks to support from Capital FM, KISS FM and BBC Radio 1 and with millions of streams and counting.