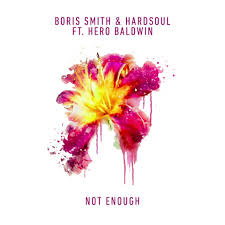 Boris Smith returns to Perfect Havoc side by side with fellow Dutch producer duo Hardsoul and their collab ‘Not Enough (feat. Hero Baldwin)’ – an up tempo feel good house number mixed with Hero Baldwin’s infectiously bright vocal.Fellow Dutch-man Boris Smith has an impressive list of credentials. He made his debut in 2009 as Beauriche on Hardwell’s Revealed label, quickly followed by an appearance at the iconic Ushuaia Ibiza alongside Hardwell himself and dance music royalty, Tiesto. Smith went on to play at acclaimed clubs and festivals including Solar, Pacha, and Dauwpop, release on eminent labels such as Musical Freedom, Toolroom and Ultra Music, and see widespread support from his DJ peers including Bob Sinclair, Kryder, Martin Solveig, and Fedde Le Grand to name but a few. Boris recently made his debut on Perfect Havoc back in June with La Fuente on ‘Cada Vez’ which has seen support from Slam! and over 800,000 streams on Spotify alone.Dutch house duo Hardsoul is best known for producing a number of club anthems after the turn of the century, most notably their international breakout hit "Back Together" (2003), but the brothers who comprise the duo are also accomplished DJs, particularly DJ Roog, and successful label owners. Hardsoul is comprised of brothers Rogier van Bueren (aka DJ Roog, one of the Netherlands' top house DJs) and Greg van Bueren. Their recording career began in the late '90s with a couple releases on the After Midnight subsidiary of the Dutch house label United Recordings (Do What I Gotta Do, 1998; Late Night Sessions, Vol. 1, 1999). In 2000 the brothers founded their own United Recordings subsidiary, Hardsoul Pressings, on which they issued a few 12" releases (All Nite Long, Never Gonna Stop, Tricky Bizniz #1); they also released a double-disc CD, Planet Hardsoul (2000), on United before switching label affiliation to the American house label Soulfuric Recordings. Their first release on Soulfuric, La Pasión de Gozar/Latino Directions (2001), was a massive success, as "La Pasión de Gozar" became an international club anthem and was licensed for numerous mix albums. Their next Soulfuric release, Back Together (2003), was an even greater success. Featuring vocalist Ron Carroll, "Back Together," like its predecessor, became an international club anthem and was licensed for number mix albums. The track's popularity spawned an accompanying double-disc mix album, Hardsoul: The Sound of Love and Dedication, Vol. 2 (2003); another related double-disc mix album, Soulfuric in the House (2003); and an international re-release of Back Together in 2004 on ITH Records, a subsidiary of Defected, a popular U.K. house label. Also in 2004, the brothers revived their Hardsoul Pressings label and proceeded to release a series of new productions (Bounson, 2005; Don't Let Love Weigh You Down, 2006; Deep Inside, 2006; et al.). Their success continued with club favorites such as "Über" (2005) released on Toolroom Trax; "My Life" (2006), a follow-up collaboration with vocalist Ron Carroll; and "Self Religion (Believe in Me)" (2007), their first release on Defected proper. Awash in success, they also founded an offshoot label of their own, R&G Electronics, in 2006.Featured Dutch vocalist Hero Baldwin is no stranger to the dance music world with lending her vocal skills to artists such as Super8 & Tab, Sir Felix, Majestique, Joshua Walter, Nearly Native and Mell Tierra along with releases on labels such as Armada Music, Le Mans Recordings, Be Yourself Music, Big Life Music and more. Not Enough also shows Hero’s undeniably talented song writing abilities.