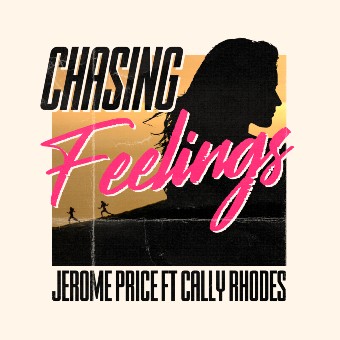 From the label that brought you Joel Corry and his top 10 hits ‘Sorry’, Lonely’ and the No. 1 single Head & Heart, comes a brand new face to the label by the name of Jerome Price with his brand new single 'Chasing Feelings' featuring UK Singer-songwriter Cally Rhodes. Available now on all platforms.

Hailing from Leicester, UK, Jerome’s musical momentum travels far and wide, with his signature upbeat sound turning heads the world over. Jerome has made his name with a number of huge remixes, from his massive rework of Tim Berg’s “Seek Bromance,” to his flip of the Justin Beiber smash “What Do You Mean”, along with an array of official remixes for major acts such as MØ, Troye Savan, Jonas Blue & Tom Walker.

Jerome’s single “Me Minus You” garnered a huge number of fans across the globe; launched by the revered YouTube channel ‘Selected’, then subsequently picked up by Sony Music - it has now gone on to reach over 10 million streams. The record was followed up with further successful singles for Selected “Nobody” Ft Karen Harding & “Nothing Left To Lose” Ft Alex Mills.

Jerome’s DJ career has also gone from strength to strength seeing him headline Selected Events in Zurich, Berlin and London as their resident, and making his debut appearances at Festivals such as SW4 and Creamfields, he has also appeared alongside Jonas Blue & Blonde in the main room at the legendary Ministry Of Sound and Hi in Ibiza.

2019 saw the launch of his own record label ‘Babylon”, where Jerome is displaying his club/underground production skills and taste. With a string of stellar releases, such as Babylon EP, BBQ & Bugaloo and Put It Down, all of these releases have been receiving support from heavyweight DJs and tastemakers.

Cally Rhodes writes honest, melodic and catchy pop and dance music. Her original music has now been streamed over 10 Million times on the Internet and her singles have appeared in Spotify Viral Top 50 Charts all over the world. As well as gaining amazing support online, Cally was labelled ‘Best Artist of the Year 2018’ by BBC Introducing in Shropshire and has also been ‘BBC Introducing Artist of the Week’ nationally. Most recently Cally’s single release, ‘Downfalls’ placed in the BBC Radio Wales A List Playlist for a month.

Cally’s music has been played on BBC Radio 1, BBC Radio 2 and used in the UK hit TV programme BBC’s ‘Strictly Come Dancing’. Having recently opened for Louise Redknapp in Cardiff as well performing on an 8-date UK tour supporting The Midnight Beast around prestigious 02 venues, Cally will be returning to the live scene again next Summer! She’s very much looking forward to playing the main stage at Cardiff Pride as well as Supporting Will Young and James Morrison at the famous Kew the Music event in 2021.Cally's media support includes MTV, Pop Dust, The Sun, PopWrapped, The Vibe Guide, CelebMix, Dancing Astronaut and many more.

'Chasing Feelings' marks yet another quality release for Perfect Havoc. The label has now achieved over 300 million streams on Spotify and Apple with tracks from its roster of breaking talent such as Joel Corry who has achieved three Top 10 records on the label including a No. 1 record with Head & Heart plus other talent such as Tobtok, Karen Harding, Kokiri, The Aston Shuffle, Mahalo, Eat More Cake and Parx. The label has a highly tuned ear for both underground and mainstream hits, licensing to labels including Atlantic Records, RCA, Columbia Records, Ministry of Sound, Polydor, Toolroom, Thrive and Astralwerks. Perfect Havoc is also a dab hand in the club world, throwing pop-up parties around the globe in London, Norway, Sweden, LA/San Francisco, Paris and South Korea.