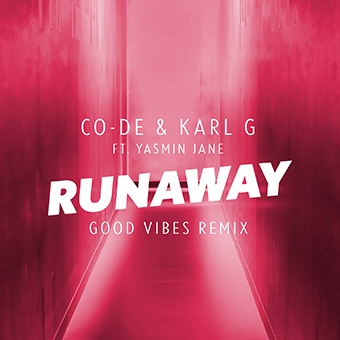 London’s hitmaking indie imprint, Perfect Havoc, today releases ‘Runaway (feat. Yasmin Jane)’ the second single by brand new dance music collective, CO-DE alongside Karl G. A super group by rights, CO-DE consists of leading house producer, Paul Emanuel; Jamesie, BBC Radio 1’s ‘Best of British’ and former Ministry of Sound resident, and Gavin McCall, founder of the Born To Dance label and club series. Between them, they have a colourful history of near death experiences, time spent at HMP and big success in the music industry with multiple hit records and awards. Now they combine to produce a sound and vision as inspiring as their life stories. Runaway takes influence and presitage from Co-De’s love of old school Trance and synthesizers which perfectly bodes well with Yasmin Jane’s unique vocal tone.

CO-DE (standing for ‘co-defendants’), brings together a bohemian group of lovable rogues influenced by disco grooves and carnival vibes to create a fresh uplifting sound with distinctive basslines. Torn apart by life and brought together by music and friendship, they combine their emotional energies to create an original and accessible sound as eclectic and as addictive as their personalities, driven by a calling to turn life-destroying negatives into life-changing positives. CO-DE are set to light up dance floors and festivals everywhere (virtual or otherwise!) and are busy planning live performances to encompass DJ sets, guest musicians and vocalists, to showcase the essence of CO-DE to audiences around the world.

Paul Emanuel is a well-known industry figure, engineering, co-producing and remixing on some of the biggest hits of all times. At Battery Recording studios, he worked with likes of Tom Jones and R Kelly, and as one half of Club Asylum, producing on garage hit singles, Kristine Blonde ‘Love Shy’ and Another Level ‘Freak Me’. As a remixer, his discography includes a star-studded list such as Rihanna and Elton John, while under his Haji & Emanuel moniker (with Seamus Haji) he’s produced and remixed some of house music’s all-time favourites including Booty Luv ‘Boogie 2nite’,’Weekend’ and ‘Last Night A DJ Saved My Life’. He brings this wealth of experience to the CO-DE project.

Jamesie (James Shiers) has a remarkable story. He beat cancer at the age of 22, and now lives with a debilitating form multiple sclerosis. Although it has disrupted his momentum producing and DJing, it’s only inspired him to fulfil his dream in music and give birth to the CO-DE project. Jamesie has already had his fair share of success on the DJ circuit, best-known as resident on the prestige Ministry of Sound Scandinavian tours. As an award winning producer, his work was regularly featured on BBC Radio 1 and KISS FM for tracks such as ‘Never Should’ and ‘Forever’ produced with partner, Karl G.  Jamesie also featured in BBC Radio 1’s ‘Best of British’ in 2010 and has had four club chart Top 5s and topped multiple download charts. His passion for music and lust for life translates into the pure energy which oozes out of the CO-DE debut single.

Gavin McCall (aka Loveable Rogues) is known for running the hugely popular Born To Dance Records and international club night of the same name. He signed the hit by Dirty Old Ann ‘Turn Me On’, teamed up with Paul Emanuel and Katherine Ellis to deliver club stomper, ‘Gotta Get Through’, and his solo production ‘I’m Alright’ went on to feature on multiple Hed Kandi compilations. Having served himself under HMP, Gavin’s rehabilitation brought about a new positive way of being, heading up DJing and production courses for young offenders, working for the Keep Out Charity on its Crime Diversion programme, and he now teaches teenagers with Social Emotional and Mental Health needs at Muntham House School.

The CO-DE trio decided the featuring vocalist on their debut single was to be Yasmin Jane after meeting her at Perfect Havoc’s roof top party in Dalston in September 2019. A truly a remarkable talent, Yasmin’s distinctive tones and meaningful lyrics have earned her support by BBC Introducing, and work with cool powerhouse labels like Ninja Tunes, and producers from Sony, Warner and Universal, including Will Baker (Dani Minogue, The Sugarbabes). Yasmin is a performer at heart, playing at the O2 Islington Academy 2, The Arches Studios and Cargo to name but a few. Delving into the depths of electronic and atmospheric synths, Yasmin Jane has the world at her fingertips and she’s the perfect addition to the CO-DE outfit. This will be Yasmin’s fourth feature on Perfect Havoc with her previous releases with Simon Field – Sirens recently hitting over 2 million streams globally along with her collab with Simon Hardy which has recently hit 500,000 streams.

Runaway sees the immensely talented producer Karl G teaming up with his old friend Jamesie and ex label boss Gavin once again under Co-De. Infamous in the 00s for his bootlegs and trance monsters, with countless Radio 1 Tried & Tested with Judge Jules, support off the likes of Fat Boy Slim, Tiesto, Armin Van Buuren, etc etc etc, official remixes for Ministry Of Sound, and radio support the world over.

He formed a successful DJ / production duo with Jamesie, that had three Music Week Upfront Top 10 hits, featured in Radio 1’s Best Of British Show for 2010, topped the download charts on several occasions and got huge support off the world’s biggest DJs.