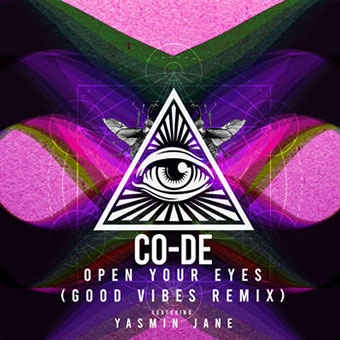 Torn apart by life, brought together by music, CO-DE; which stands for co-defendants, are a new collective of talent consisting of Paul Emanuel, Jamesie Shiers and Gavin McCall, who all have a history of success in the music industry who combine to produce sounds and a vision as inspiring as their life stories.

CO-DE brings together a bohemian group of lovable rogues looking to make their mark again in life despite personal adversity.Combining their emotional energies to create a collection of music as eclectic and as addictive as their personalities, all driven by the personal tragedy, disability, time spent at HMP, prejudice, near death experiences and sinking to life's darkest places comes a group placing their energy into music.

Influenced by disco grooves and carnival vibes, their uplifting sound and distinctive bass-lines are set to fire up airwaves, light up dance floors and festivals across the world, with live performances, encompassing DJ sets, guest musicians and vocalists, to build their collective brand. CO-DE are original, accessible, ground-breaking and diverse, they share a unique passion for music and are driven to turning life destroying negatives into a life changing positives, as they deliver their music to the world with a strong passion.

PaulEmanuel is well known behind the scenes of the music industry. Paul has worked at Battery Recording studios, working with the likes of Tom Jones and R Kelly and was also one half of Club Asylum where he was engineering, co-producing and remixing some of the biggest garage hits of all times including Kci & JoJo‘Tell Me That It’s Real’, Kristine Blonde ‘Love Shy’, Shola Ama ‘Imagine’ andAnother Level ‘Freak Me’. Paul has also remixed for the likes of Rihanna, Chipmunk, Elton John, Brandy and The Ting Tings as well as remixing Top 40 hits such as Booty Luv ‘Boogie 2nite’, Chanel ‘My Life’, Haji & Emanuel ‘Take MeAway’, ‘Weekend’ and ‘Last Night A DJ Saved My Life.

Jamesie (James Shiers) has quite a story after surviving cancer at the age of 22 and his never ending battle with debhabillitating multiple sclerosis after being diagnosed in 2009 has disrupted his momentum with production and DJing but hasinspired Jamesie to begin a new project with CO-DE and to fulfil his dream in music. Jamesie is also known as an award winning promoter and was a well known resident DJ for the prestige Ministry of Sound for their Scandinavian tours, his music has also been featured multiple times on BBC Radio 1 and KISS FM withKarl G and tracks such as “Never Should”, “Forever”, “Gamemaster”, “Song AtSunrise”, “If Only” and more. Jamesie also featured in BBC Radio 1’s ‘Best ofBritish’ in 2010 and has had 4 club chart Top 5s and topped multiple download charts.

GavinMcCall is hugely known in the dance scene for running Born To Dance Records which was also an international club night and hits such as Dirty old Ann ‘TurnMe On’, Gavin also produced ‘I’m Alright’ which featured on multiple Hed Kandi compilations as well as “Take Me Higher” and “Gotta Get Through This” by Daniel Beddingfield with Paul Emanuel and Katherine Ellis. Having served himself underHMP, Gavin now teaches teenagers with extreme behavioural mental health issues,DJ’ing and productions at UK prisons.

Torn apart by life circumstances but brought back together by their love of music and friendship, they stand together as CO-DEs...