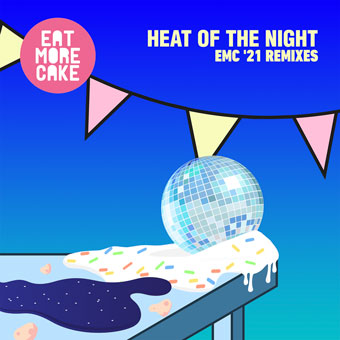 Hoxton label Perfect Havoc are thrilled to have Eat More Cake do a  2021 rework of their classic track ‘Heat Of The Night’. The London duo, who have had previous smash hits with Perfect Havoc such as ‘Music Sounds Better With You’ and ‘Hide From The Light’ has taken the song and reinterpreted it in a completely new way to reflect their ever evolving sound. The rework has a driving rhythm and deep bassline that brings the original track into a new, modern light.

Their latest release Show Me, released on Perfect Havoc, received rave reviews back in August and was supported by Apple Music. The single followed on from their previous tracks Inside Out, All I Ever Wanted and Memories which made New Music Friday UK and Hot New Dance Beats on Spotify along with support from Mistajam on BBC Radio 1 and Andi Durrant on KISS Fresh. Eat More Cake deliver an electro chilled house vibe with Show Me, and encompasses a unique brass sound mixed with a catchy vocal hook.

In the last few years the group have released frequently on Hoxton based label and management company Perfect Havoc with tracks such as Heat Of The Night - included in the Dream League Soccer app and also went to No.1 on Hype Machine along with receiving support from Pete Tong on BBC Radio 1, Coco Cole on Capital Xtra, Judge Jules, Oliver Heldens, and The Aston Shuffle. Further releases included Hide From The Light which has surpassed over 1 million streams on Spotify, Animal, Set On You and Music Sounds Better With You, generating the trio over 8million streams in total.