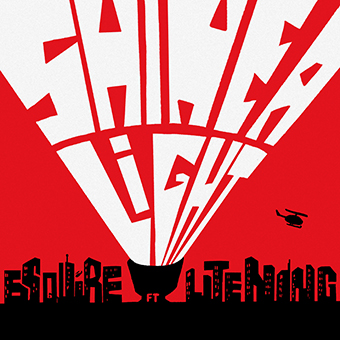 eSquire is the moniker of Liverpudlian Lee Squires, audio engineer turned record producer/remixer whose love for dance music blossomed out of the euphoria of the late ‘90s. Quite evidently, he is well versed in the cultural progression of dance music; some of the biggest names in the business have had such a large impact on his formation that some of his greatest work has been a revitalisation of their best records. Shine A Light clearly shows eSquire’s love of the 90s with his use of the classic M1 Piano sound alongside Litening’s catchy and nostalgic vocal and ability for catchy songs.

eSquire has a refined sound, consisting of uplifting house music, laden with big room energy, striking vocals and huge piano lines - a timelessly popular and relevant approach to electronic dance music, lapped up by the masses across the globe as they search for a little slice of paradise to get lost in over and over again.

Litening is a London based Producer, Songwriter, Singer and multi-instrumentalist who is known for her bright and uplifting dance pop tracks. The first glimpse of musical talent emerged in church, alongside music she was tipped as to go onto become a world class athletics professional for Team GB, before a life changing injury brought her back to her first love of music. Litening’s songwriting talent has seen her in demand, writing with the likes of 99 souls, Riton, Papa Zeus, Alltag, with her write on Henry Hacking’s ‘New Love’ hitting top 3 dance chart placements around the world and major Radio1 and Kiss FM support along with also featuring on Henry Hacking’s latest release ‘Kryptonite’ which has generated over 300,000 streams since release. Influenced by the likes of Jax Jones, Felix Jaehn and 90s girl bands, Litening describes her sound as melodic driven, up tempo dance-pop/house music. Litening’s debut 'Genie In A Bottle' comes in the form of a genius cover of the pop classic by Christina Aguilera, in collaboration with Faustix.