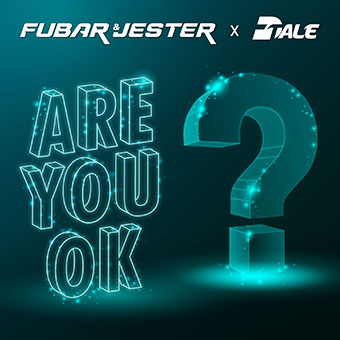 UK label Perfect Havoc, the name behind Joel Corry and his Top 10 singles ‘Sorry’ & ‘Lonely’ officially introduce UK new comers Fubar & Jester x DTale with their new single titled ‘Are You Ok?’ The song's simple but powerful question resonates with all, in these unique times of trouble and challenge facing the world today. This single reminds us all how important it is to extend consideration to each other. It is sure to connect with all listeners, and provide hope and reinforce that togetherness is the new creed.

Primarily DJs & Producer’s Jason (Fubar) &Lee (Jester) have collectively been DJing & making music for almost 30Years. During this time they have performed regularly around the world at some of the most iconic venues including: Sky Garden – Bali, Halfmoon & TheWorld Famous Full Moon Festival – Koh Phangan, Thailand’ and the boys have played regularly In Ibiza at Eden, Space, Es Paradis, Ibiza Rocks & more, to making their mark in their respective Residencies for Ministry Of Sound,Gatecrasher, BCM, Syndicate and many more iconic venues around the World.

Their journey so far has seen them play along side some of the worlds biggest DJ’s like David Guetta, Calvin Harris, Armin VanBuuren, Eric Morillo, Faithless, Solardo, Camelph at and many more. Prior to teaming up the duo have both had great success producing, having many Beatport Top10 Hits with support from the likes of Pete Tong, Afrojack, Paul Oakenfold & Judge Jules to name a few.

Are You Ok? epitomises their heart and support for others during these unprecedented times. They recently raised £20,000 for the NHS after delivering a 24/hr live stream DJ set for fans which included well known names such as Judge Jules, Paul Oakenfold, DannyHoward, Sonique, K-Klass, Slip Matt, Dave Pearce & more.

Daniel Pearce has worked as a drummer, backing-singer, songwriter and vocalist for over twenty years. In 2010 Danielco-wrote and sung on Dizzee Rascal’s last UK number one; ‘Dirtee Disco’. He subsequently toured and performed with Dizzee Rascal throughout the world for six years. Over the last ten years Daniel has extended his industry credibility and reputation by becoming one of the most successful ‘hit-vocalists’ from theUK with over a billion associated streams. Under the name DTale, he has provided vocals to many hit songs with artists such as Eric Prydz, The Chemical Brothers, Philip George, DJFresh, Format B, and Alex Adair. In December 2015, DTale's enthralling cover of Weeknd’s ‘Earned It’ was released on the Ministry of Sound compilation; WhenCool Was King

His most notable contributions include the delivery of the renowned and superlative vocals on Sigma’s ‘multi- platinum’ selling global hit ‘Nobody To Love’. He performed live with them for over fours years covering the biggest festivals and venues in the world. The track became the highest selling Drum and Bass track of all time. It was consequently a BRIT nomination for best single of 2014. In the same year, he also provided a significant vocal contribution to the Grammy nominated ‘I Got U’ by DukeDumont. Last year, Daniel’s irrepressible vocals became the standout melody toDJ Regard’s multi-platinum selling global smash ‘Ride It’. Daniel’s extraordinary hit vocal success means he is in constant demand for writing, recording and tours. Are You OK? was his original recognition that we all need to hear this question from each other