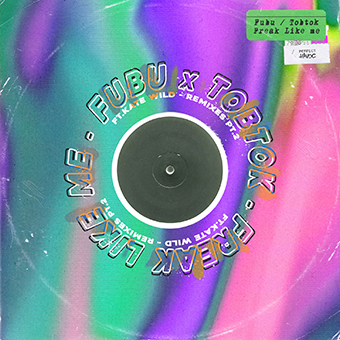 Fubu & Tobtok release Part 2 of their official remix package for their latest collaboration ‘Freak Like Me (feat. Kate Wild)’ on Hoxton based labelPerfect Havoc. The package is the second part of 9 mixes with Part 2 featuring the likes of Azello (supported byKISS FM), Apollo, Konsin, M.D Jones and Maff Boothroyd, who individually add their flare and style to Fubu & Tobtok’s original. Freak Like Me has already gained over 1 million streams globally and racked up multiple radio spins on BBC Radio 1 (Scott Mills / Charlie Hedges) KISS FM, Gaydio, Radio105and has become a TikTok sensation with over 200 TikTok users supporting the track in their videos, racking up 2.5 million views on the platform.

27-year-old Tobtok aka Tobias Karlsson, is one of the most talented artists leading the new wave of Swedish electronic music DJ / producers. He has generated over 300 million streams across his music globally with a double platinum record to his name in Australia with ‘Fast Car’. He’s enjoyed consistent, regular DJ and radio support from the likes of BBC Radio 1, KISSFM, Capital Xtra and more and is in high demand as a remixer and producer for other artists, yet still finds time to DJ around the world at Ushuaia, Creamfields and The Warehouse Project. Tobtok continues to prove he is a rare, finely tuned talent, evident in his signings to Ministry of Sound, Astralwerks, Toolroom, Hexagon and Kitsune. Tobtok is ready to break through in a big way.

UK born artist Kate Wild is a singer, songwriter and director of the vocal sample label, 91Vocals. Her vocal samples have appeared on countless records by Spinnin, Defected, Monster cat and Hospital Records for artists such as Breathe Carolina, Jay Hardway, Dannic and Olly James, making her the silent voice of house and EDM. With recent radio support from Don Diablo, Kryder, Sirius XM, Kiss FM and BBC R1 for her own 2020 release 'One Night' with Geses and Simon Skylar, Kate is fast becoming a name to recognise.