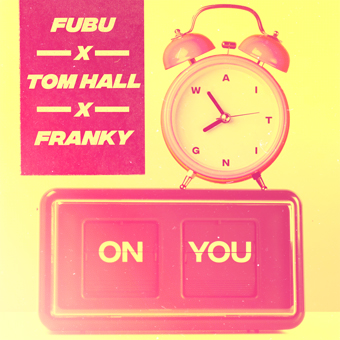 Perfect Havoc are thrilled to have previous label alumni Fubu& Tom Hall team up for their collaborative single ‘Waiting On You’. Also joining in on the fun is singer/songwriter Franky who provides an incomparable vocal delivery. ‘Waiting on You’, a tune about holding out for that special one, is an energetic piano house anthem with joyous melodies and smooth production quality that has now become standard for Tom Hall and Fubu’s releases.

Scottish DJ/Producer FUBU broke into the mainstream in 2019 with his huge reworking of the classic 'Oh Ohhh' which saw great support on BBC R1, Kiss FM, Capital FM and many others. FUBU’s sound is firmly rooted in uplifting house music with plenty of energy and great vocals. He has seen support on previous releases from the likes of Charlie Hedges, Billy Da Kid, Paul Van Dyk, EDX, Chicane, Sebastien Drums, Sammy Porter, Nathan C, Olly James and many more. Fubu then collaborated with Swedish Dj and producer Tobtok in early 2020 with their track ‘Freak Like Me’ which amassed over 3 million streams globally and was supported by the likes of BBC Radio 1 with 9 consecutive spins on Party Anthems followed by a series of support on KISS FM, Gaydio and MTV Club with the official music video.

Tom Hall is a Shropshire based talent showcasing DJ sets across the UK, Europe and beyond.
His most recent singles “Go Down Fighting”, “With You” & “Collide” have received big support from BBC Radio 1 DJ Jordan North, BBC Radio 1 DJ Dev, BBC Radio 1 DJ's Mollie King and Matt Edmundson and also made it into the iTunes Dance chart at No.6 and main chart at No.28. Tom’s previous single 'Casual', released on Hardwell’s Gemstone label continues to grow and has generated over3 million streams globally and has featured as the show opener on the reality TV Show ‘Celebrity’s Go Dating’.

The in-demand artist has offered his remix hand to the likes of Todd Terry, Joel Corry, PS1, Tobtok & more.

Yorkshire born singer/songwriter Franky blends her main influences from old school Funk, Disco and even R’n’B into contemporary pop that fizzes with attitude and explodes in anthemic choruses. Think Icona Pop with some classic Earth, Wind & Fire groove. Her debut single ‘All Of The Boys’, gained plaudits from Clash Magazine, EQ Music and multiple radio plays from BBC Introducing. Franky has now returned to the music foray with her equally energetic single ‘Follow My Lead’, which shows off the singer’s signature sassy lyrical talent and upbeat fizzy pop sensibilities. Alongside her singles, Franky has also been establishing herself as a DJ, performing sets at many popular events including Pride 2019.