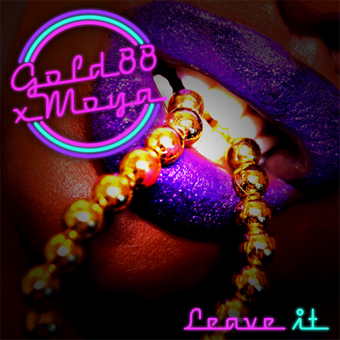 Perfect Havoc welcomes Gold 88 with their brand new single ‘Leave It’ featuring vocals from MOYA, with the pair executing a dark and pumping collaboration.

British / Irish House duo Gold 88 consists of producers / DJs Danny Morelli and Max Auton This new release is the follow up to Gold 88’swidely supported Tech House weapon, ‘DiscoTek’, and big house anthem “Keep You Closer” which helped propel their name in the international club scene and achieve diverse worldwide tastemaker support from Solomun, David Guetta, Marco Carola, TCTS, Skrillex, Tocadisco, Danny Howard, and Tiesto amongst many others. Not forgetting their recent vocal house anthem, ‘Hold Me Tight’, gaining heavy support on BBC Radio1 and Kiss FM. It went on to be featured on ITV’s incredibly popular Love Island, giving the release an extraordinary boost with it now growing to over a million streams on Spotify alone.

MOYA is an international Broadway singer and actress and was recently seen starring as Effie White in Dream Girls on the West End and Broadway, winning for Lead Actress in a Musical for the role, as well as a2010 NAACP Theatre Award Winner for Lead Actress. In 2016, Moya was also a semi-finalist on America’s Got Talent with videos bringing in millions of views.

With a huge love of House and Dance music, “Leave It” will be one of many forays into the dance market for this incredible busy and talented lady with a stack of releases coming in what will be a big 2021.