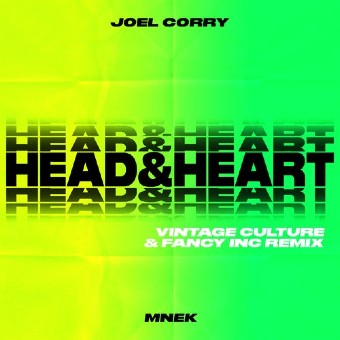 Fresh off the back two Platinum records and an extraordinary breakthrough 12 months, Joel Corry has teamed up with MNEK on anthemic single, ‘Head & Heart’, alongside a new remix by the amazing Vintage Culture with Fancy Inc - now available on all platforms!

As a DJ, Joel also toured extensively across throughout 2019 and early 2020, as well as making his debut at Capital’s Jingle Bell Ball and Top Of The Pops’ Christmas Day & New Year specials alongside the likes of Lewis Capaldi, Freya Ridings and Stormzy. He headed out on his first ever headline Australian Tour in January and supported both Sigala and Jax Jones on their UKTours in February, while also turning in official remixes for the likes of Stormzy (‘Own It’ ft. Ed Sheeran & Burna Boy), Wiley, Aitch, Sigala and Ella Eyreover the last six months.