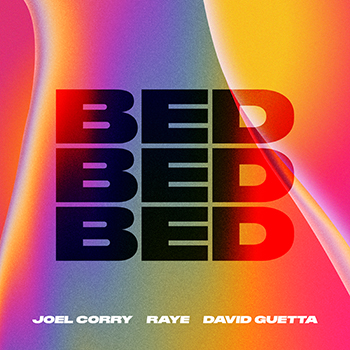 ‘BED’ sees Joel join forces with RAYE and legendary dance producer, David Guetta, on a track written to capture the feelings of longing experienced by so many during the past 12 months.

Tapping into his knack for writing bright, infectious and relatable dance music alongside Guetta, who remixed ‘Head & Heart’ under his Jack Back club moniker last year, and RAYE – currently riding high in the charts with her latest hit, ‘Regardless’ ft. Rudimental – ‘BED’ is a tour de force collaboration featuring three artists at the very top of their game.

“I’m buzzing to finally release BED”, Joel says of the record. “I’ve put so much hard work and love into it and I’m so lucky to be able to collaborate with amazing talents like RAYE and the legend, David Guetta. I’m just so excited for the world to hear it.”

Joel first broke through in summer 2019 with ‘Sorry’ – a thumping re-work of Monsta Boy’s UKG classic of the same name – which spent 10 weeks inthe UK Top 10, peaking at #6, and broke Shazam’s all-time daily record in the UK after receiving over 41,000 tags in one 24-hour period.

He followed that up with the release of ‘Lonely’ in January 2020, which went on to peak at #4 on the OCC and spend 11 weeks of its own inside the UK Top 10, before ‘Head & Heart’ ft. MNEK scored him his first UK #1 single last June – a track that went onto hold the top spot for six consecutive weeks, making it the longest-running consecutive UK #1 of 2020. All three singles are now officially certified Platinum, with ‘Head & Heart’ still making waves internationally to mark Joel out as one of the biggest and most exciting breakout dance artists of the last18 months.

Similarly, RAYE has enjoyed huge success over the last five years, working with some of the biggest dance producers in the world including Jax Jones, David Guetta and Diplo, as well as collaborating with everyone from Charli XCX to Mabel. She’s sold over 2.5 million records as a solo artist, with a further 3 million via collaborations – including 2020’s ‘Secrets’ with Regard, which peaked at #7 in the UK. RAYE’s also established herself as a gifted songwriter, penning records for the likes of Beyoncé, Rosalia, Little Mix, Normani, Khalid, 6LACK and more, marking her out as one of the UK’s most talented and versatile new-gen artists.

David Guetta has spent the last 30 years pushing dance music to new heights; from first making his name as a DJ in the Paris underground back to selling over 50 million records worldwide, he has been a key figure in dance music’s global migration to the charts. Responsible for era-defining hits including 2009’s UK #1 single ‘When Love Takes Over’ ft. Kelly Rowland – lifted from Grammy-nominated fourth studio album, ‘One Love’ – 2011’s ‘Titanium’ ft. Sia and 2014’s ‘Lovers On The Sun’ ft. Sam Martin, both of which also scored Guetta UK #1 singles, his influence on popular music is undeniable. More recently, he was voted DJ Mag’s #1 DJ for a second time in their annual Top 100 DJs poll in 2020 – he first won the accolade in 2011 – and released most recent album, ‘7’, in 2018.