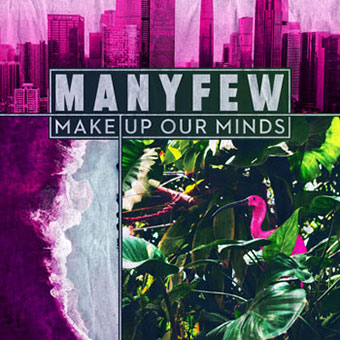 Manyfew - Make Up Our Minds

Swedish production duo ManyFew are back and are stronger than ever with their brand-new single, ‘Make Up Our Minds’. Finding its home on one of the UK’s hottest labels, this powerful addition to their release catalogue follows on fromManyFew’s previous Perfect Havoc release ‘Makin’ Love’ which has achieved over1.6 million streams in total.

Leading the listener in with their signature piano chords and a catchy vocal piece, ‘Make Up Our Minds’ is instantly recognisable as a ManyFew creation. Taking an unexpected turn, the brothers incorporate an edgy and raw bass line alongside a catchy vocal that will work wonders on the dance floor. Showcasing a different side to their production style, ManyFew prove that they have a masterful handle on a wide variety of genres and seamlessly match feel-good piano house with an injection of deep house power.

Releasing a steady stream of radio and club-ready originals over the past few years, the self- taught duo has garnered solid and consistent support from industry heavyweights for both their self-released and label released records. Their dance floor filler ‘Where To Go’ Ft. Twiggy reached #10 in the Music Week Upfront Club Chart, and their summer-tinged single ‘Ibiza’ rocketed to #9 on theUpfront Club Chart, receiving support from Future House King Oliver Heldens. Hitting #5 in the MusicWeek Upfront Club Chart with ‘Still In Love’, their following record ‘Closer Love’ Ft. Twiggy gained 700k plays on YouTube and their own VIP Mix received worldwide support on radio stations including Kiss FM (UK) and SiriusXM.

Making a huge impact with ‘Makin’ Love’ on Perfect Havoc in late 2019, the track has been streamed over a million times on Spotify alone and was supported by dance music royalty Tiësto, Oliver Heldens, Dada Life and Spotify’s major ‘Dance Party’Playlist. Making their Axtone debut with the label’s final release of the decade, ManyFew teamed up with Marcus Santoro and Hayley May for a momentous collaboration, ‘For You’, which was supported by the likes of Meduza, Tiësto, Don Diablo and Dimitri Vegas &Like Mike.Selected as one of DJ Mag’s ‘Emerging Artists You Need To Hear’ in 2019,ManyFew continue to radiate positivity with their Electronic Heaven Radio Show. Pulling in over600k listeners per month, the show has been broadcasted on some of the globe’s most prominent stations including Mambo Radio and SLAM FM and continues to draw new listeners in from all over the world.

Exuding sheer passion and excitement in everything that they do, ManyFew have entered the new decade with an influx of sensational releases that have pushed them further into a league of their own.‘WhatYou Do To Me’ kick-started the year and was picked up by Tiësto, Arielle Free and Mark Knight. ‘On My Own’ followed shortly after, receiving spins from David Guetta, Benny Benassi, Kryder and Oliver Heldens. Playing their first UK performance at the Ministry of Sound Weekender and taking part in Axtone’s‘ House Party’ Live Stream, ManyFew and are gearing up to play at Ministry ofSound when the clubbing scene can return to normal. With their imminent debuton Spinnin’ Records and plenty of livestream performances coming up, ManyFew continue to bring joy and good vibes through their sound.