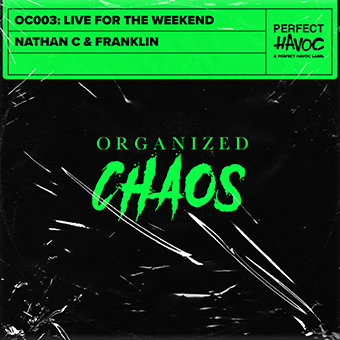 Hoxton based label ‘Perfect Havoc’ launched their brand new sub-label back in May called ‘Organized Chaos’ with it’s sole purpose to release non-stop tunes and cater for that 3am crowd.. The new label comes out of pure passion and love for the club and house scene from the original founders; Adam Griffin and Rob Davies.

Third to release on Organized Chaos are NathanC & Franklin with ‘Live For The Weekend, a straight up original house track guaranteed to make you bop.

Nathan C is an acclaimed Music Producer & DJ from London, UK. Over the last few years his work has been championed by many of the world’s biggestDJ’s. His tracks have featured on many reputed independent Dance labels fromToolroom to the Majors, Virgin/Positiva being the latest. Having co-written2019’s biggest dance hits ‘Piece of Your Heart’ by Meduza, which surpassed abillion global streams, hitting double platinum sales in the UK, earning him aGrammy nomination for best Dance Single at the 2020 awards. With widely supported official remixes for the likes of Marshmello, Martin Solveig, Bastille and Flume amongst others. On top of all this Nathan manages a relentless production schedule running his own studio and producing for a number of DJs and Producers in the House scene.

Joining Nathan C is newcomer Franklin, who has been causing a bit of astir with his releases such as ‘Let Me Love You’ alongside chart topping producer and DJ, John Gibbons which was supported by BBC Radio 1’s Scott Mills and achieved over 1.5 million streams, along with other releases includingEmpty Spaces with James Arthur and Digital Farm Animals, a serious one to watch!