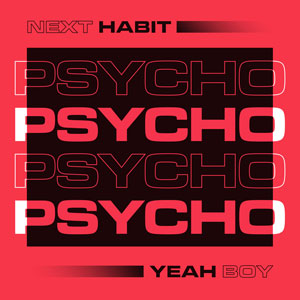 Emerging UK house duo, Next Habit are back with third single ‘Psycho’,collaborating again with Australian singer-songwriter, Yeah Boy, of Parachute Youth fame. Released on hit making label, PerfectHavoc on 15th May, Psycho follows their most streamed production to date -‘Identical’. Released back in January Identical scored airplay on BBC Radio1 and KISS FM in the UK, as well in the US on Diplo’s RevolutionShow on SiriusXM BPM. Surpassing over 1.25 million streams globally and with a string of key DJ support behind the track, it’s clear that Next Habit are making an impressionable mark on house music lovers across the world.

Next Habit rose from the shadows of the UK underground scene in September 2019 dropping their debut track ‘U Got Me’ via Hoxton-based label Perfect Havoc. It saw support from BBC Radio 1’s Scott Mills and Mistajam, KISS FM, KISS Dance and Capital’s Anton Powers, and achieved over650,000 global streams – impressive stats for a debut. In just a short time, the mystery duo have seen incredible reactions and support across the dance music spectrum, including; Dave Treacy (RTE Pulse), Bingo Players, LostFrequencies, Joel Corry, Spada, Liquid Todd (SiriusXM), Kid Massive, Sigala, Sam Feldt, NERVO and Tiesto. Their music presents an insight into the character of an enigmatic duo who are poised to make a breakthrough on theUK scene.

With new single,Psycho, Next Habit continues to prove why they are ones to watch, this time with a cool, deep house orientated production with infectious grooves, mainstream accessibility, and seductive vocals.

Those vocals come courtesy of Adelaide artist, Johnny Castro aka Yeah Boy. Johnny had wild success with his former group, Parachute Youth , with platinum and gold record sales, #1’s in nine countries and tallied over 50 million streams online. During the release of his first EP 'Can't Get Enough' (Warner Music(UK) and Big Beat (US)), Johnny played major events around the world including the Australia Parklife Tour, I Love Techno (Belgium), Leeds& Reading Festival (UK), and supported Rudimental on their European tour. He continues to be an in-demand producer and writer for artists across a multitude of genres, including 3LAU, Benson, Starsmith, Stefan Abingdon,Kelli-Leigh, Jasmine Thompson, and Artful Dodger.