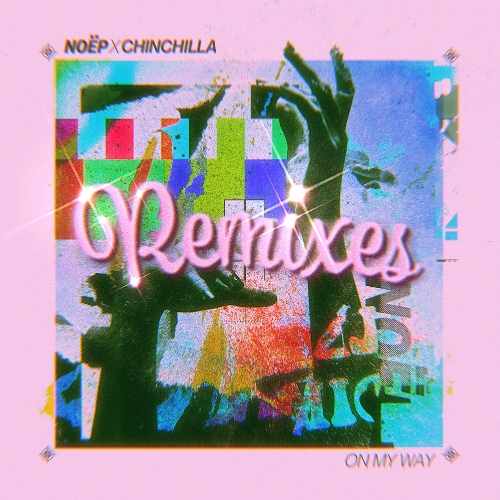 Back in October NOËP released his new single ‘On My Way’ featuring UK singer-songwriter CHINCHILLA, which received incredible support from the likes of BBC Radio 1 Party Anthems and BBC Radio 1 Dance Anthems along with huge support in Estonia from all radio stations where the track reached #1 in the Estonian Radio Airplay chart. The single has so far amassed over 1.3 million streams on Spotify and reached the Spotify Top 50 at #9 and Spotify Viral Chart at #7. December saw NOËP delivering an early Christmas gift with his own VIP mix, perfect for those who prefer a harder more tech style bass line and beat. Now NOËP is back with a VIP Funk Mix, providing a new interpretation on the track with silky smooth beats and feelgood sounds. Also on this release are remixes by Shahin Shantiaei and Kyka, who have given the track a dancefloor makeover with their own unique touches, piano tech house beats from Shahin and deep house tribal rhytms from Kyka.

Having directed several commercials, videos and films, NOËP has a drive to tell his own stories via music videos. As for most of his previous tracks, ‘On My Way’ is supported by a self-directed music video, playing around with the modern virtual reality world, bringing together the artist’s love for gaming and the message behind the new single. “I feel like my background as a film director influences a lot of my songwriting. The storytelling has a specific structure which is usually inspired by the aesthetics of film screenplays. A separate visual world entails with every track you write, generating a new reality.” The new video for ‘On My Way’, which merges the traditional lyric video format with virtual reality and modern storytelling, will be out on October30th.

NOËP’s single ‘fk this up’, accompanied by a self-directed video, was licensed to Warner Music and soon became a top 5 airplay hit in Italy last year. While entering Spotify's Viral Charts in various international markets like GSA, France, Benelux and the UK, ’fk this up' has gained over 10million streams and counting. The track features the rising UK pop artist CHINCHILLA and has been remixed by the legendary club DJ Benny Benassi. His latest single 'Young Boy', an uplifting banger about living your life to the fullest, was released together with a spectacular animated video in a post-apocalyptic world.

An interesting fact about NOËP is his passion for nature being one of the reasons that drives him as an artist, with a secret mission to one day set up his own private nature reserve. Focusing on a purpose greater than himself has helped him get through times of depression and anxiety. Beside scaring for our planet some other interests of his are building wooden furniture and playing video games.

CHINCHILLA is 22 year old, London born singer, songwriter and producer. 2019 saw the launch of CHINCHILLA’s career and the release of a string of self-produced singles - ‘Elements’, ‘Fabulous’, ‘Demand Respect’ along with two collaborations - one with Estonian artist NOEP - ‘Fk This Up’ which amassed over 10 million streams and was in the Top 10 Shazam chart in Italy for 8 consecutive weeks, and the other with Brighton based artist Ren -‘How To Be Me’. Now signed to Columbia Records (Sony) CHINCHILLA is setting up for 2021 and beyond.

Hailing from Iran’s capital, Tehran, Shahin Shantiaei is hotly-tipped as one of the middle east’s most promising up and coming talents. It was his love of music and melodies in early childhood that later saw Shahin learn to play piano and study musical theory before becoming a fully-fledged dance music producer. Since2016, he’s proved his worth with releases on Prison Entertainment, Nueva Recordings and Samui Recordings, and has upped his game catching the eye of one the UK’s longest running house labels, Glasgow Underground, for release in late2020.

But to the present, Shahin Shantiaei has found himself in bed with one of London’s freshest sounding labels, Organized Chaos for his latest release. On ‘The Court’, Shahin’s clear and present influence from the eastern world offers a refreshingly captivating spin on the archetypal peak-time club banger format, whilst retaining all the potent characteristics of a decisive dance cut. With spins on previous tracks from the likes of Cosmic Gate and Mawayy, it’s an exciting time to see what new support lies ahead.

Early morning radio voice, DJ and producer Jürgen Pärnsalu aka Kyka from Estonia began to get interested in music actively in 1996. He made acquaintance with DJ technique and started to play records for fun. Soon he started to explore the magical world of producing. He discovered that the best way to express himself and achieve his goals is through electronic music. Today we are able to place Kyka as a veteran next to other Estonian deep house producers. He's career now in radio, also asa DJ & producer dates back for over decade with releases on world known labels supported by the greatest names in house scene.