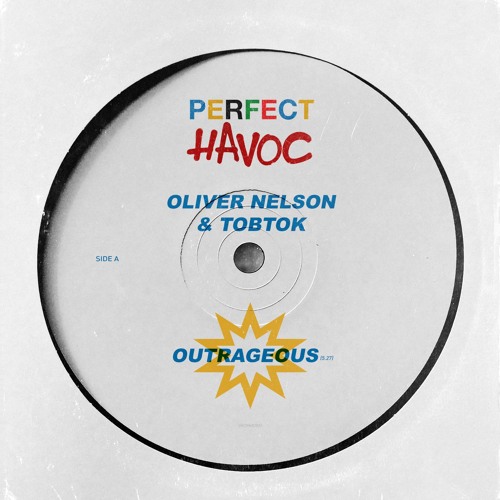 Swedish duo, Oliver Nelson & Tobtok follow recent remix collaborations for the likes of Albin Lee Meldau, Lemaitre, and Frank Walker, as well as their own tracks ’99 Red Balloons’ and ‘Jealous’ (released on Astralwerks / Capitol Records), with their brand new rendition of Stix & Stoned ‘Outrageous’ - 23 years after the original was released. The Oliver Nelson & Tobtok version is released on Hoxton-based label, Perfect Havoc.Stix & Stoned was the alter ego of DJs Judge Jules and John Kelly, and ‘Outrageous’ cracked the top 40 after a release on the hugely influential Positiva label back in 1996. Oliver Nelson & Tobtok have taken the original main riff and created a big, infectious house groove for 2019 dancefloors.Oliver Nelson is well qualified to take on this classic track. He’s reached no.1 on Hype Machine 10 times over. His productions have amassed over 250 million streams across YouTube, Spotify and Soundcloud, including massive remixes such as NEIKED’s ‘Sexual’ (16 million streams) and Ella Henderson’s ‘Ghost’ (19 million streams). He collaborated on ‘Riding Shotgun’ with tropical house king, Kygo for the artist’s recent second album, ‘Kids In Love’, generating over 27 million streams so far. Oliver has been a resident DJ in Europe for the tastemaker French label Kitsune, and in 2018, toured America selling out venues such as Output, Grasshopper Underground, and The Standard LA.Alongside Oliver Nelson, Tobtok a.k.a Tobias Karlsson is one of the most exciting young producers to emerge from the Swedish scene in recent years, signing tracks to labels including Kitsune, Toolroom and Ministry of Sound. With a sound ranging from nu-disco to house, Tobtok has enjoyed global success with tracks such as ‘Fast Car’ ft River (double platinum in Australia and streamed over31 million times) and his biggest track this summer, piano-driven house track, ‘As I Sleep’ with fellow Swede, Adrian Lux (12 million views on YouTube and 4 million streams on Spotify so far).Like Oliver Nelson, Tobtok also hit the US DJ circuit this summer, playing to packed out crowds at Output, The Standard, Love & Propaganda and more, ending up in Ibiza supporting Kygo at Ushuaia.