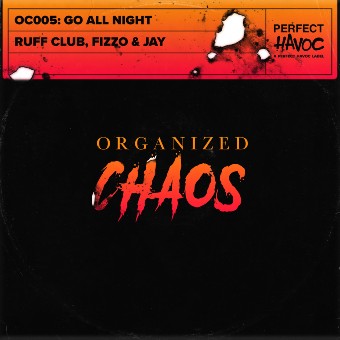 Hoxton-based label, Organized Chaos have hit the ground running since its inception in May this year. Promising non-stop tunes and a devoted focus on tracks that cater for the 3am crowd, their latest release comes in the form of ‘Go All Night’, which sees Dubai-based hitmaking trip, Ruff Club, team up with fellow UAE locals, Fizzo & Jay. Dropping on 25th September, ‘Go All Night’ is a hard-hitting house cut with rampant energy, thunderous beat patterns and gritty instrumental layers. A high-octane stomper, primed for the peak hours of the party, it provides the perfect choice for those looking for that hands up and heads down moment, while hypnotising with its narcotic vocal hook. Stream it now via all platforms: http://PerfectHavoc.lnk.to/goallnight

Ruff Club are a trio of British DJ’s and producers, Scott Forshaw, Joe Beck and Jack Harris. After spending time together in the studio in the UAE, they’ve been moulding and refining their unique style and sound, which they’ve kept under wraps until now. Focusing on bringing their individual, fresh influences to the studio, they have secured several releases on prominent UK based labels. Individually, they’ve had releases on labels such as Toolroom, Armada and Ultra and racking up over 5 million streams worldwide. Expect to hear plenty more of Ruff Club from here on.

Also based out of Dubai, Fizzo & Jay are well versed in the art of production, both being qualified audio engineers with bachelors in Audio Production. Their combined knowledge of the technical aspect in the studio makes a worthy adversary for their unwavering creativity, which will no doubt keep them on a steady incline within the industry. A fundamental part of Ibiza Global Radio’s UAE arm, their weekly podcast called ‘Fabricated Junk’ continues to garner the duo an increasing amount of attention as they build on their ever-increasing presence within the electronic community.

Since its creation in May 2020 by music industry boffs, Adam Griffin and Rob Davies, Organized Chaos has been on a mission to release bang up-to-date house music aimed squarely at the 3am crowd. Releases to date include debut single ‘Don’t Over Think It’ by house icon Todd Terry, super-producer James Hurr (Mark Knight, Prok & Fitch), and label founder, Adam Griffin; a collaboration between Mahalo and Milkwish with their excellent, modern rework of Tangerine Dream’s 1984 hit, ‘Love On A Real Train’, plus other key releases with Nathan C and Franklin, and farfetch’d.