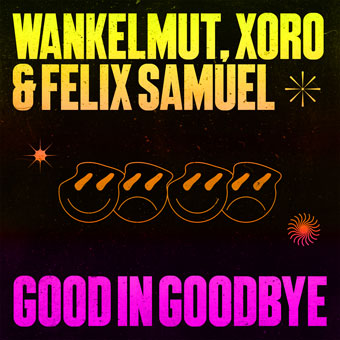 Perfect Havoc welcome Wankelmut & Felix Samuel to the label, joining up with PH label/management artist Xoro on ‘Good In Goodbye’.‘ Good In Goodbye exhibits the trio’s unique production skills in layering, stripping everything down to a simple beat and vocal in the chorus and building up towards a sonic spectrum.

Berlin based DJ and producer Jacob Dilssner aka Wankelmut ranks among the most popular and renowned representatives of electronic music “made in Germany”.His single “My Head Is A Jungle”, featuring Australian singer Emma Louise, made it to the Top 20 across Europe, peaking at #5 in the UK charts with Mark Kinchen’s (MK) remix in summer 2014. During the last two years Wankelmut has collaborated with various vocalists like Björn Dixgard (singer of Mando Diao) or Charlotte OC and subsequently scored 2 Mio monthly listeners on Spotify to date. His monthly radio show can be heard on Germany’s biggest radio station WDR 1Live for almost four years now and of course he never forgets his club music roots with releases on Defected or Mother / Superfett.

The 22-year-old Edinburgh based Felix Samuel, has certainly made a name for himself as an up-and-coming talent from the UK. Having worked with the likes of Tujamo, Jonasu, Madism, Karma Child and MACKS (former frontman of Dante Klein), as well as releasing on some of the biggest dance labels in the world; 3Beat (Universal), Onesevenmusic/Disco:wax, Soave and Heartfeldt (Sam Feldt's label), the sky really is the limit for this young Brit.